PREPARE YOUR TRIP TO CAMEROON

There is no visa on arrival.

What you need to know:

Area and population
475,442 square kilometres with a population of approximately 25 million.
Cameroon is a country of diversity and contrasts. The population is made up of at least 150 ethnic groups with traditions dating back more than a thousand years. Each region of the country also has its own particular folkways and traditional customs, which is reflected in the diversity of crafts, art, architecture and lifestyle. The steppe, forest, coast, savannah and mountains, as well as the rich and varied wildlife, constitute the country’s biodiversity.

Languages
Cameroon is a linguistically rich country with about 250 living languages spoken by the different ethnic groups.

The official languages are French and English.

Currency
The national currency is the CFA franc. Cash withdrawals from ATMs are possible in major cities and credit card payments are only possible in large hotels. It is recommended to carry cash in EUR.

Time zone
No difference for winter time, one hour behind in summer (reference: Western European time).

Customs formalities
Import licence required for hunting weapons.
Export of art objects is regulated and, if necessary, must be declared at the airport and a tax paid (from 5000 XAF).

Cost of living
Hotel prices
3-star hotels (Cameroonian standard): 25,000F – 55,000F for a single room
4-5 star hotels: from 150,000F
In small towns, there are also very comfortable hotels of modest standing: from 12,000F per night for a single room.
There are also many individuals who offer furnished rentals in secure areas for a few days/weeks (see Airbnb Cameroon).

Cameroonian restaurants or “circuits”.
The “circuits” are rather modest restaurants, but very communicative. You will eat very well, fresh local food, at reasonable prices and in a friendly atmosphere. You can make interesting contacts and acquaintances who will enrich your stay and inform you about the highlights of their city/village/region.

Car rental
There are many agencies that rent various types of cars with or without drivers.

Train
A CAMRAIL train line connects the major cities of Yaoundé and Douala and another one connects Yaoundé and Ngaoundéré in the north.
Yaoundé-Ngaoundéré: 10,000F – 17,000F
Douala-Yaoundé: 3000F – 6000F

The climatic conditions are different in the different parts of Cameroon, but the tropical climate predominates.
The southern third is part of the tropical rainforest belt, the north has a steppe climate with a short rainy season and large temperature variations. In between, there is an area with a savannah climate and a longer rainy season.
During the rainy season, from March to November, there can be heavy rains, floods and landslides.
In the south of the country, there is a dry season from November to February, a moderate wet period from March to July and the rainy season from August to the end of September. The average temperature is 26 degrees.
In the north, the rainy season runs from May to the end of September, but with less rainfall on average per year. The average temperature is 35 degrees.

The best time to visit Cameroon is from December to February. It rains less and is the sunniest period. In the geographical south it is hot during the day and the nights are cooler. In the arid north, it is very hot during the day, while at night it can be very cool.
On the coast the heat can be stifling, with minimum temperatures above 20 degrees and maximums of around 30°C, tempered by the breeze.

Prefer light clothing for the day, loose-fitting and made of natural fibres (cotton or linen), turban against the desert wind, jacket and jumper for the evening, comfortable sandals and a hat to protect you from the sun. On the coast, also bring a light mackintosh and an umbrella.
Dress decently when visiting churches and religious places/sites, entering or leaving public buildings and places where proper dress is required.

N.B. :
In Cameroon, people dress both in European and African style, and rather chic and decent. There is a preference for traditional African dress, sewn locally by the many dressmakers in the various districts and markets. Traditional fabrics are better suited to the local climate.

Cameroon is in the tropics, where malaria is common. It is advisable to take a malaria prophylaxis before leaving (see Institute of Tropical Medicine or ask your doctor) and to sleep under a mosquito net on site.
Any animals you take with you should be vaccinated against rabies.

Lung infection – Coronavirus Covid-19 (03/03/2022)
Due to the circulation of the COVID-19 virus and its variants, which remain highly contagious, all entry to and exit from Cameroon is restricted.
A negative PCR test is required on arrival in the country, including for young children. The sample must be taken within 72 hours before boarding a flight to Cameroon. In addition, an antigenic test is systematically carried out on arrival for all travellers at the airport.
It is recommended to follow the prevention measures of the Ministry of Health and apply the barrier gestures.
When leaving Cameroon, a PCR test is required at the airport, despite the vaccination against Covid-19. (Cost: 30,000 F)
The tests can be carried out in health centres and approved places as well as in some hospitals.

Taking photographs
Military security areas such as barracks, some public buildings and airports cannot be photographed; it is best to ask locally.
If you wish to photograph people, you must ask them beforehand. 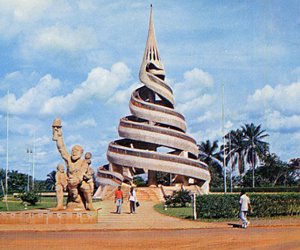 A nice meeting today at the Embassy of Cameroon in Berlin with the courtesy visit paid to H.E. NDOCKI Victor

NSO’S FON ON THE TRAIL OF NGONNSO IN BERLIN

We use cookies on our website to give you the most relevant experience by remembering your preferences and repeat visits. By clicking “Accept All”, you consent to the use of ALL the cookies. However, you may visit "Cookie Settings" to provide a controlled consent.
Cookie SettingsAccept All
Manage consent

This website uses cookies to improve your experience while you navigate through the website. Out of these, the cookies that are categorized as necessary are stored on your browser as they are essential for the working of basic functionalities of the website. We also use third-party cookies that help us analyze and understand how you use this website. These cookies will be stored in your browser only with your consent. You also have the option to opt-out of these cookies. But opting out of some of these cookies may affect your browsing experience.
Necessary Always Enabled
Necessary cookies are absolutely essential for the website to function properly. This category only includes cookies that ensures basic functionalities and security features of the website. These cookies do not store any personal information.
Non-necessary
Any cookies that may not be particularly necessary for the website to function and is used specifically to collect user personal data via analytics, ads, other embedded contents are termed as non-necessary cookies. It is mandatory to procure user consent prior to running these cookies on your website.
SAVE & ACCEPT
error: Content is protected !!